This is not the latest version of Ngspice available.

This is not the latest version of Ngspice available.

To install Ngspice, run the following command from the command line or from PowerShell:

To upgrade Ngspice, run the following command from the command line or from PowerShell:

To uninstall Ngspice, run the following command from the command line or from PowerShell:

ngspice is the open source spice simulator for electric and electronic circuits.

Such a circuit may comprise of JFETs, bipolar and MOS transistors, passive elements like R, L, or C, diodes, transmission lines and other devices, all interconnected in a netlist. Digital circuits are simulated as well, event driven and fast, from single gates to complex circuits. And you may enter the combination of both analog and digital as a mixed-signal circuit.

ngspice offers a wealth of device models for active, passive, analog, and digital elements. Model parameters are provided by the semiconductor manufacturers. The user add her circuits as a netlist, and the output is one or more graphs of currents, voltages and other electrical quantities or is saved in a data file.

ngspice does not provide schematic entry. Its input is command line or file based. There are however third party interfaces available.

ngspice builds on many operating systems. All popular Linux distributions, Cygwin or FreeBSD offer ngspice as well. The F.A.Q. and documentation pages provide a lot of information, a detailed manual is available. Mailing lists, discussion forums and a bug tracker are offered.

If you are new to Spice and ngspice, don't hesitate to give it a try, if you are a professional user, you will benefit from its robustness and flexibility. 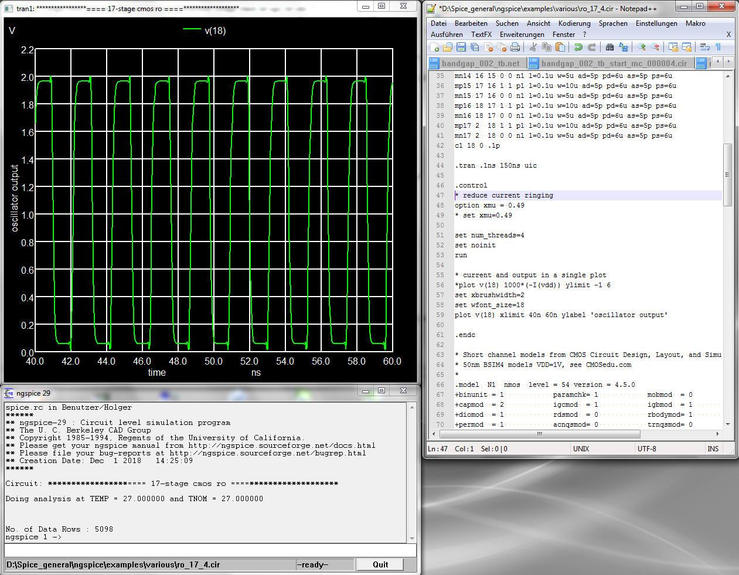 Discussion for the Ngspice Package